Your Complete Guide To Vagrant On Mac

Most of us, developers, don’t develop in a system close to production system. We develop in Mac (or Windows), but usually deploy on a linux flavour. This makes deployment painful. Vagrant fills this gap in the web-development process.

Vagrant makes it easy to create development boxes as close to production. Technically, virtualisation by VMWare and VirtualBox solved this issue partially. I say partially, because it has been a tedious procedure to setup a virtual machine. Vagrant abstracts virtualisation from developer and makes creating virtual boxes smooth and quick.

By developing in the virtualised machines (VMs), you can keep the development machine clutter-free.

It is also possible to share the Vagrant boxes. So all your developers can have the same development environment without cluttering their machines.

Enough of theory. Let us install Vagrant on Mac.

Vagrant uses virtualisation at the background. You could use either VirtualBox or VMWare. I use VirtualBox because it is free.

Before going ahead with installations, one advice: since these are long installation process, it is better to disable energy setting. Otherwise while installing 50 - 90 packages unattended, system might go into sleep-mode and you may have to restart the installation again

Latest version of VirtualBox, as of writing, is 4.3.12. Download and open the dmg file. 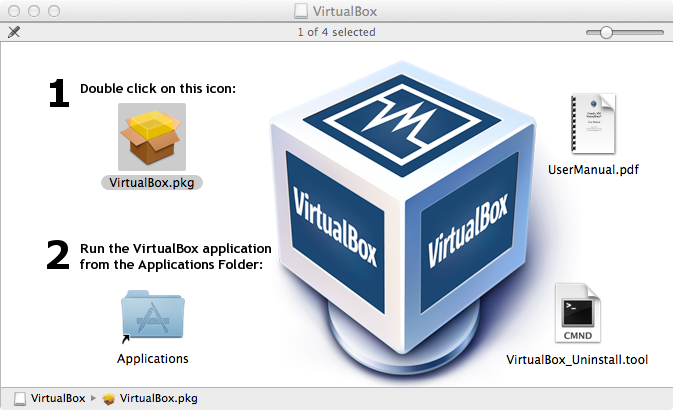 Proceed with the instructions on the screen, which are fairly self-explanatory.

Latest version of Vagrant, as of writing, is 1.6.3. Similar to VirtualBox, download the dmg file and open it. Proceed with the instruction on the screen to install it.

Now let us create our first vagrant box. One of the feature of vagrant eco-system is that lot of prebuilt boxes are available for download. Go to, Vagrant Cloud, and search for a box. I chose a minimal centos box.

Since I have an unreliable internet connectivity, I prefer to download the box locally and then create a vagrant box (Bit of a detail, but will help new Mac users. All of the below commands are issued in Terminal app).

If you have a reliable bandwidth, then you can type:

If you downloaded the box first, then the commands are:

I also prefer to create a directory for every VM box I create.

When I first installed VirtualBox and Vagrant and brought up vagrant box, I got an error:

This is because, vagrant is trying to setup a shared folder and it fails because shared folders can be set only if Guest Additions are installed for VirtualBox. Instead of going to VirtualBox and installing it, this error can be solved with a vagrant plugin called vagrant-vbguest. Install the plugin using,

and try again to bring up the vagrant box.

While we are at vagrant plugins, install another useful vagrant plugin, vagrant-list. This adds a functionality to Vagrant which will list all the boxes created using vagrant and also provide their statues. Very useful if the system becomes slow because you are running too many virtual boxes.

Now if you issue, vagrant list, it will list, the details of the vagrant boxes, including those that are running.

It is always a good practice to update the vagrant box as soon as it is created. So let us do that now. But before that you need to connect:

This will connect to the virtual machine and show vagrant prompt. Issue these within vagrant box.

It will take sometime to update everything. If you are stepping out in-between, be sure to modify the ‘energy settings’, otherwise you may have to start over.

Once completed, exit from vagrant and reload the box again.

Now that you have updated your base box, you can package this box to be used as a base box. Let us do that:

Now let us add this box to our vagrant boxes.

From now on, you can use this to create new vagrant boxes:

In case you want to remove the earlier box,

When you create a vagrant box (by vagrant init), it creates a config file named VagrantFile in the host’s folder. So far I have played around with this config file only for port forwarding. There are other uses too. You should refer to the documentation. How does port forwarding works? Let’s say you run a web server within vagrant and you want to access the server from the host’s browser. Then you forward the guest’s port (virtual machine) to the host. The configurations are:

Here, I forward two ports from the guest’s to the host’s.

Remember to vagrant reload if you change the VagrantFile while vagrant is up and running.

In case you want to remove Vagrant from your Mac, say for upgrading:

Vagrant documentation is detailed and that should serve you well. There are other blog posts that helped me as well.